I was so sad to leave all 5 estate sales last weekend for Branson! To make sure I didn’t miss all the action, I took Thursday off work and hit Estate Sale by Katherine. I also stopped by Grandma’s Collectibles in Cabot and worked my booth at Do Drop In in Beebe.

Katherine’s was a really neat sale. The cute little home was located in a more rural area of Little Rock next to a fishing pond. The front yard was large with a long dirt driveway, which made parking convenient. The weather was wonderful, so I really enjoyed the walk from my parking spot to the home.

My hubby came along for an afternoon of junkin’ and pointed out quite a few neat things. The first thing he found was an old red metal baking pan. I rarely see painted pans, especially in red, so I was thrilled he found it…for $1! It will be going in our kitchen! These old pans stand up to use WAY better than the pans of today. All of the baking pans we received as gifts when we got married less than two years ago have started rusting and flaking, which makes me wonder how safe they are to use. 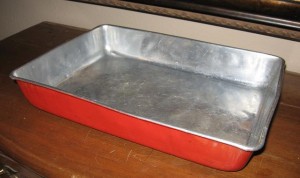 I found a few other red items.  This owl is so fun and unique.  Looks like it would be great to use with a votive or t-lite candle. 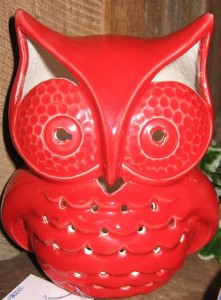 Then there was this neat red bell with the Razorback sticker. Woo Pig Soooi! 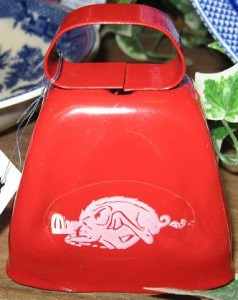 The last of my red items were these red-handled kitchen utensils: 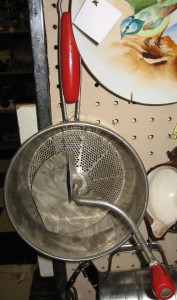 Next up was this salt and pepper set that reminds me of the Blue Onion pattern. 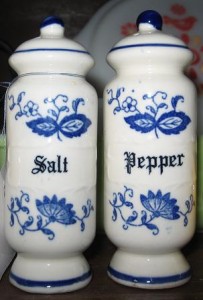 After Katherine’s, we visited Grandma’s Collectibles in Cabot, Arkansas. I’ve found so many neat things there over the years, so I love visiting.  This time around, I found this nice light blue Glasbake mixing bowl. The ones I typically see are white, so I thought this was a nice find. 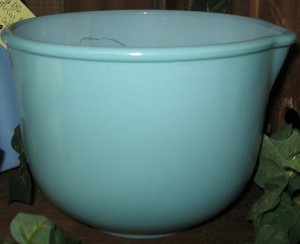 Afterward, we went to Do Drop In to add some more items and “fluff” my booth. I took photos, but my husband downloaded them to his computer before deleting all the photos on the camera for the Branson trip, so I’ve got to get those from him so I can show you just how much stuff my mom and I have packed in our booth!

Now for our weekend in Branson — the weather was awful! We left Friday afternoon and endured cold rain on Saturday and then snow and sleet on Sunday! The snow and sleet was actually a blessing because it was a good excuse to stay an extra day.

I was vacationing with a bunch of non-junkers, but I was able to run into Apple Tree Mall for about 15 minutes before they closed on Saturday and spent a wonderful hour at Mrs. Cadwell’s Flea Market on Monday. Both places were great, so next time you’re in Branson, check them out! Apple Tree Mall is located on the main Branson strip and Mrs. Cadwell’s is near the Branson Landing.

Caleb, my husband, has learned that red-handled kitchen utensils always catch my eye when I’m shopping. He brought me a bucket-full of nicely-priced utensils, so I bought a couple. I’ve not seen a red-handled knife sharpener before, so I had to get it:

Then he brought me this super cool red and chrome travel iron.  It still works and looks great in my booth at Jenifer’s: 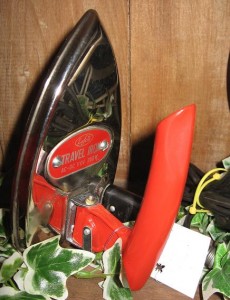 The mystery piece of the weekend is this creamer. It looks like Currier & Ives, but I know it’s not because it’s not marked Royal China Company.  It has a USA mark along with another raised mark, but I have no idea what it is. Mom is a Currier & Ives buff and thought maybe it could be Taylor Smith Taylor, but I haven’t found a photo of what a Taylor Smith Taylor Currier & Ives creamer looks like yet.  I refuse to price it until I know what it is — who knows, it might be rare! 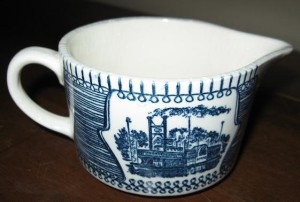 This concludes my finds for the weekend. I’m still working on finding out who is having sales this coming weekend. I’m pretty sure Sales by Nancy is having a sale, but we’re playing phone tag so I probably won’t be able to give much of a notice about that sale.  Looks as if this may be a slow weekend for sales, probably due to Spring Break.