The opportunity arose when my hubby received the honor of being accepted onto the Editorial Board of the Law Review at UALR School of Law. Not only did he receive a full-paid scholarship for his last year of law school, but he also got an all-expense-paid trip to San Diego, California to go to a Law Review conference. I was facing being home alone for 5 days when I realized his trip was the same weekend as First Monday Trade Days. That’s when I made the call to my parents and told them either we were going to Canton or I was coming to stay with them for 5 days!  A few days after my trip proposal, Mom called me to tell me they had reserved a camp site for 3 nights right on the Trade Days property! 😀

No family trip would be complete without a couple of furbabies: Roxie and Bear: 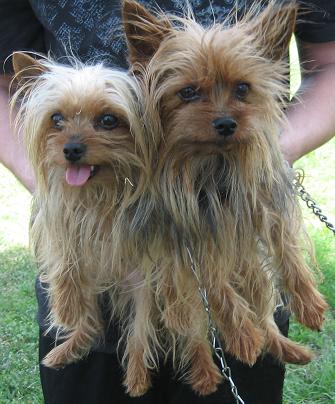 The trips to and from Canton were completely full of drama. We had flats both ways!  The first one was a doozy. Apparently Dad took the curb too sharp when pulling off of their street in Searcy, AR and knocked off the valve stem of one of the tires on the camper. It had begun raining as we left, so we had absolutely no clue we had a flat until around Cabot when a lady passed us pointing and looking all mad. Then we started hearing an awful noise — we’re guessing the rubber flew off the tire at the poor lady! When Dad finally pulled over, all that was left was the rim. Luckily he had thought to purchase a spare the day before!  Here’s what the worn-out rim looks like: 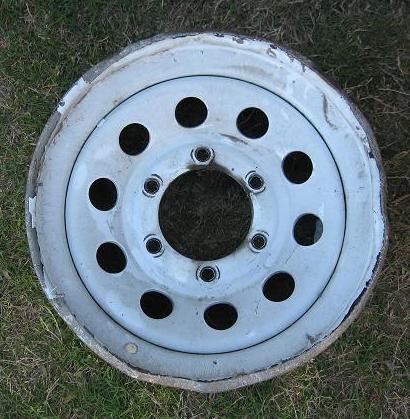 Mom got the idea while in Canton to use the rim as a garden hose reel so we can keep it as a souvenir of our trip. Gotta love it!

We finally got to the Canton RV Park around 10:00PM Thursday night. After all the drama of the day, we were excited to take showers and go to bed! Until we saw the showers….. 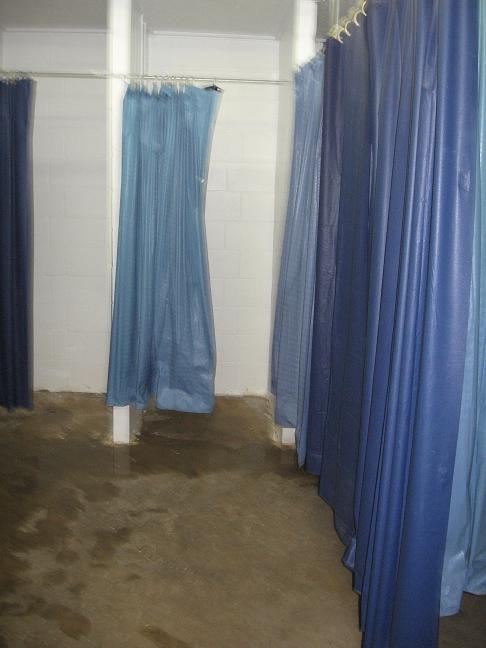 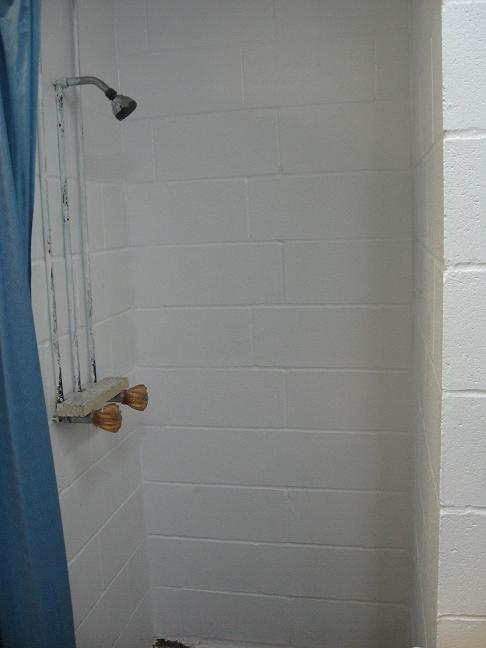 Call me spoiled, but I’m used to the showers when we go camping — Every campsite I’ve ever been to has shower stalls that actually have DOORS. It was very hard to be modest with no room to change clothes!  The women we encountered were modest, but from what Dad says, there was no modesty in the men’s room! And there was NO hot water!  After I was sunburned I really dreaded stepping under that cold, cold water. The sad thing is that I bet some of the veterans of the Trade Days can probably tell me exactly where to go for decent showers. We drove all over looking but never could find any other bathrooms with showers!

Now that I got all the negative points out of the way, I can talk about the shopping! 🙂  Our campsite was literally just across the street from the outdoor lots. We could shop till we dropped, go back to the camper and take a break, and then go back out! 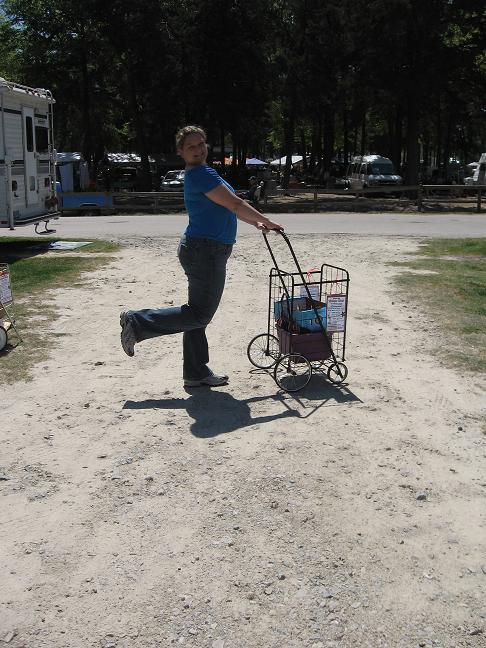 I had to decorate our carts with advertising for the Antique Alley Antique Show. One of the purposes of my trip was to recruit any great vendors I met. 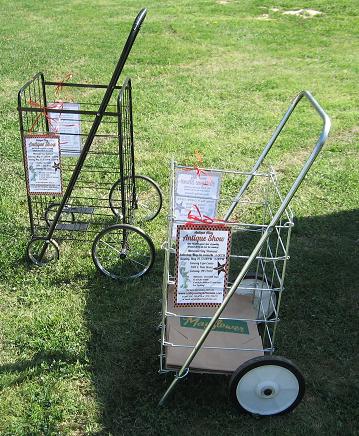 There were hundreds of vendors and even more RVs and campers on-site. We were amazed! The people in the left-middle of the photo below rented those scooters on an hourly basis. With over 28 miles of paths between all the vendors, scooters were the only way some could see it all before becoming completely worn out! 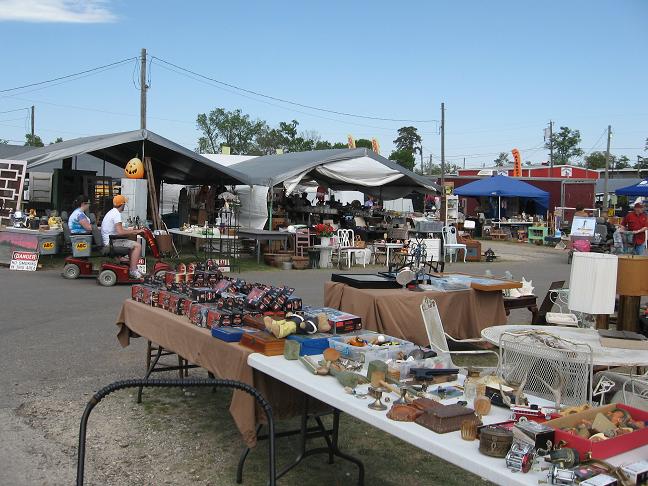 From what people had told me prior to my trip, I really expected to find truck-loads of stuff at bargain prices. What actually happened is that I encountered some bargain booths, but a lot were priced at antique mall prices with some room for price-haggling. After going through a pavilion or two I figured my best bet was the outside booths for bargains. I did go through the pavilions and Civic Center to do some recruiting. I met Sue McDowell, who will be one of our vendors at Antique Alley! I really liked her collection of old pottery planters.

The items I did purchase (The Mountain Dew can is just a prop) are super cool: 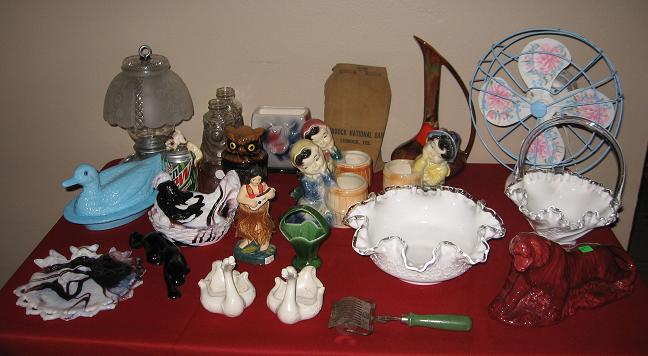 I have a hard time finding Westmoreland candy dishes, especially slag glass dishes, so I was thrilled to find the duck, hen, owl, and cat pieces above. The owl is actually made by Imperial glass. What’s super funny is that I think I found where the vendor was trying to sell this exact piece on eBay.  The design in the slag glass matches perfectly! She probably would have sold it if she would have listed the piece as Imperial glass instead of Westmoreland. 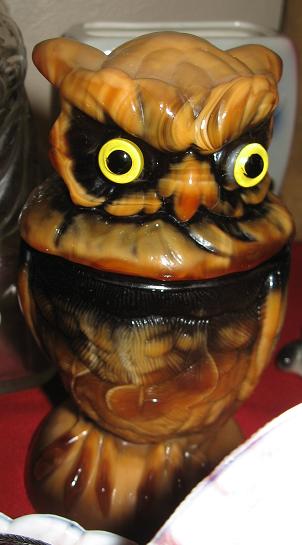 A couple from south Arkansas had an outdoor booth with a large selection of hand-made bird feeders. They take vintage and antique glass bowls, lampshades, etc and repurpose them! 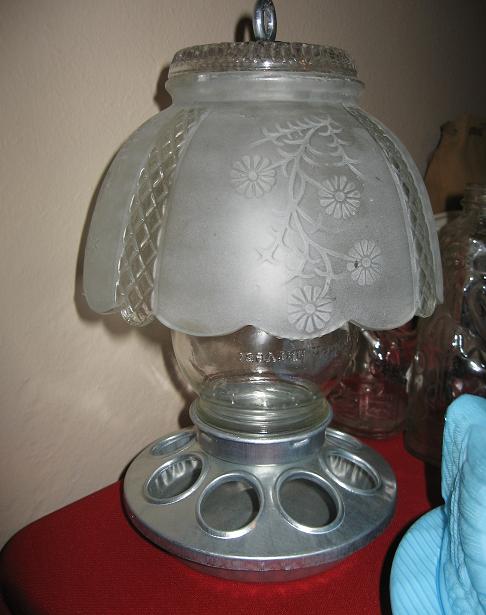 I can’t resist kitties who like Diet Mountain Dew! The one hanging on the side is hard to find, especially at a good price! 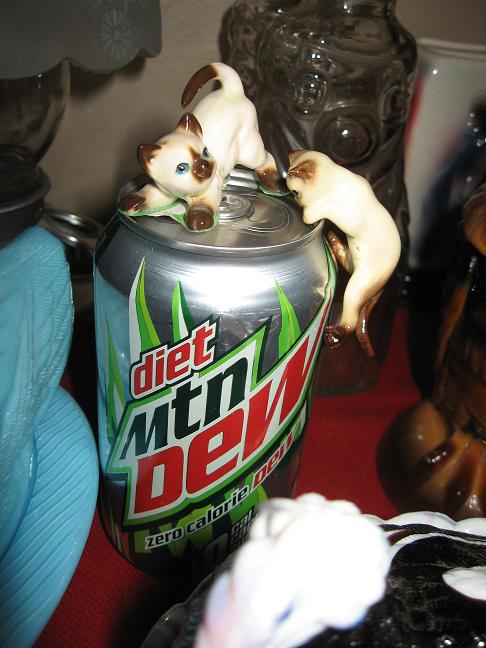 My super favorite find of the whole trip was this hand-painted Shabby Chic Kenmore fan: 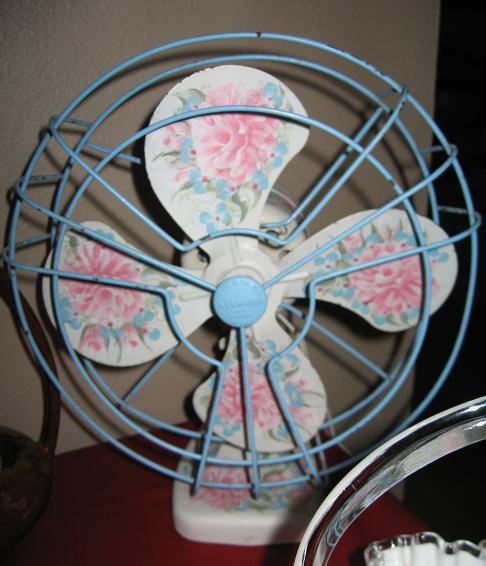 Even the back of the fan blades are painted! 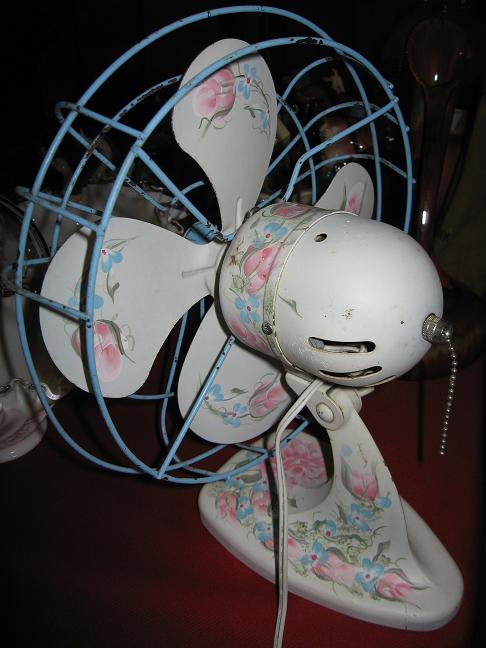 When I found the fan, it was covered in dirt. No telling where the vendor got it! I was so excited about it that I took it apart and cleaned it the evening I bought it. This is definitely a one-of-a-kind fan! Items that have been hand-painted like this sell for out of this world on eBay so I might be brave and list it. However, with the high fees and the difficult customers on eBay these days, I may be better off just taking it to one of my booths.

Within the group of things I found were a Fenton Spanish Lace basket and bowl that will go great with my Silver Crest collection, as well as Grapette clown bottles, Royal Copley planters, a chalkware Hula girl, a small Camark basket, a couple of Hull swans, a large piece of Dryden pottery, a McCoy tiger planter, and other miscellaneous. Some of the pieces are hard to find in central Arkansas, so I was glad to get out of my normal junking zone to find some unique things to take to my antique booths.

We had an absolute blast junkin’ at Canton, Texas’s First Monday Trade Days on Friday, Saturday, and Sunday morning.  We didn’t see it all, but loved what we did see! It was definitely a trip any junker should experience! 🙂

6 thoughts on “The Canton Experience”