Going to Round Top, Texas for Antiques Week has been a dream of mine for a long time. As wonderful as my husband is, I knew he would never enjoy a trip that would require an 8+ hour drive to go antique shopping, so I knew I’d have to find someone to go with me that loves antiques and junk as much as I do. My buddy Robin came to my rescue and made a way to make my dream come true.  We planned to leave Thursday and break the 8.5 hour trip in half with a visit to Canton. Then we’d spend Friday and Saturday in Round Top and then decide to drive back either Saturday or Sunday depending on how we felt.

The planning started a month out. This trip really requires planning much further out to get a good hotel. The closest available hotel I could find was a Best Western in Navasota, Texas, which is an hour away from Round Top, Texas. I think I only got a hotel that close because I was searching as they had a room cancellation because we talked to some ladies that booked their room 4 months out and had to pick the same hotel we did.

Canton is around 4.5 hours away from Maumelle, so it was the perfect place for a break.  We stayed there from 1:00 until 5:00. Canton can take days to shop, so we quickly covered the grounds. I did pause to buy this neat piece of pottery: 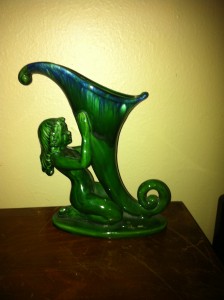 At around 5:00PM, we started our drive to Navasota, Texas. We got there around 9:15 and were ready to crash for the evening. Unfortunately the road to the hotel was changed to a “one way” street going away from the hotel a week or so before our trip. So after a very long drive, Robin and I just sat in my truck at the gas station in front of the hotel wondering how the heck we’d get to it. We finally asked the attendant in the gas station. He told us we had to get back on the freeway and drive to the next exit to take an overpass to get on the access road to the hotel. After checking in, we were greeted by oil field workers hanging out in their camping chairs drinking beer in the parking lot in front of the only handy parking spot. I’m sure they just loved me and my bright headlights as I waited for them to move out of the way. 🙂

The next morning we got up early and headed to Round Top, Texas. Neither of us had time to plan out our trip, so we just played it all by ear. The first field we came upon was the La Bahia Antique Show. It is an awesome outdoor market with the exhibitors setting up under tents: 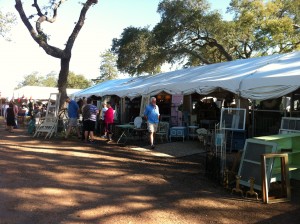 This was one of my favorite spots of the trip. I bought a 6′ Christmas tree and 3 boxes of Shiny Brite ornaments that I plan to use for decorating the November 9-10 Antique Alley Arkansas Antique Show.  Robin found some fun charms. Here are the front/back photos: 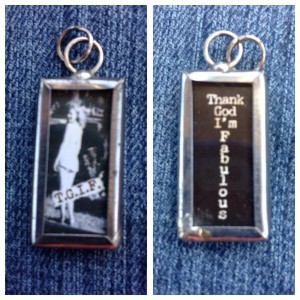 We met a neat lady named Kiki Neumann, who is known for her postcards with words made from license-plate letters. She took a photo of us standing in front of her Shasta camper. 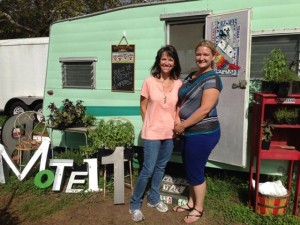 After La Bahia, we drove down the road a bit until we came to Cole’s Antique Show. This was also a great treat. Exhibitors from all over the country set up at this show, but they don’t charge admission! I’m amazed they are able to do that — but I have heard the booth rent is very high. Here are some neat things Robin and I saw:

Below is a hanging epergne, which is most likely Murano: 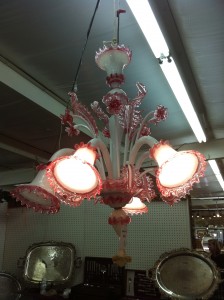 This piece is an early Lladro piece. I love the story it tells! Their buggy is hung on a stump and you can tell everyone but the horses have given up! 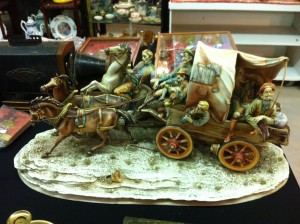 I love Holt Howard figurines. This awesome Christmas head vase is no exception! 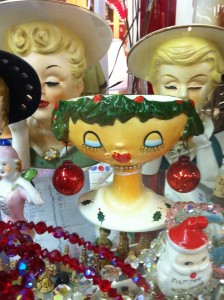 These softball-playing nuns cracked me up! 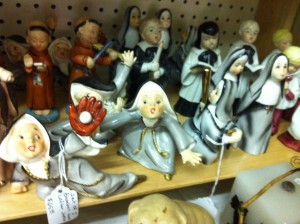 Robin loves the artists Maxfield Parrish and Atkinson Fox.  An exhibitor from California had multiple pieces by these artists. 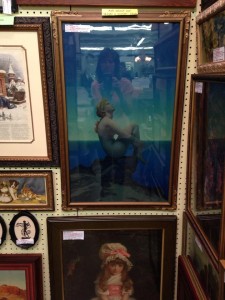 My find of the day were these super old and hard to find Christmas tree candle holder clips and old ornaments.  It’s hard for me to believe that people lit candles on their Christmas trees back in the day! 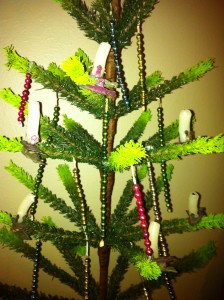 Cole’s Antique Show closed at 6:00 that day, so we started on our way to the hotel until we passed by another outdoor market that had signs saying “open late”.  So of course we had to stop.  They were open until 9PM! 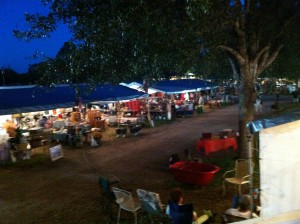 This is where I found the cutest 1930s-40s majorette doll that will go perfectly with my Christmas decorations for the antique show:

We finally got back to our hotel room around 10:30. We had an incredibly productive day. Not only had we found cool things to buy, but also I was able to sign up quite a few exhibitors for the November antique show.  I was amazed at how many exhibitors I knew. I didn’t expect to know many of them at all!  And everyone was so nice everywhere we went. It was a great day!

On Saturday we decided to experience the Warrenton and Marburger shows.  We went to Marburger first, which has a $10 admission fee. I have never seen so many upscale, just-like-in-a-magazine booths in my life! They were incredible. June of Estate Sales by June sets up there, so it was neat to see a familiar face. I quickly learned that many of the exhibitors in this show do not like people taking photos, but I did get a few before I was scolded by an exhibitor. 🙂 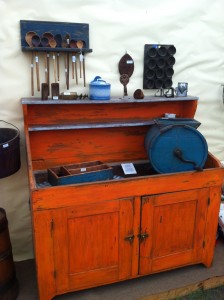 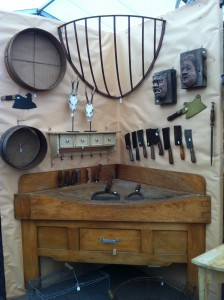 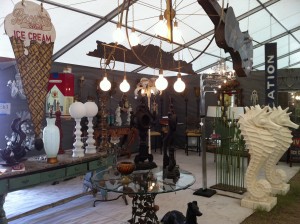 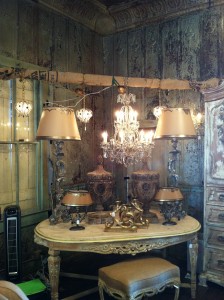 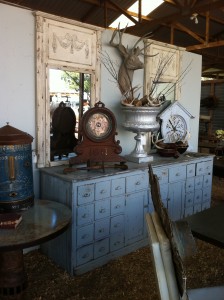 Next we went to the Bar-W field, which includes Zapp Hall and other popular fields.  The fields were massive. You can see the tents for as far as the eyes can see. 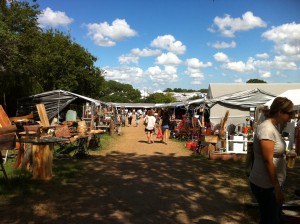 Here we met another Arkansas local, Brian Brown.  One of his friends in another field had a chalkboard sign in his booth that said, “For a good time, call Brian Brown at …”. Robin noticed it was a 501 number, which gave us reason to investigate.  Ends up his friend was playing a funny prank on him and when we asked who Brian was, he told us where to find him. I wish I would have thought to take a photo of his booth. He has some really neat stuff!

Just as we were leaving Zapp Hall, I happened to find the booth of Garden Antiques Vintage. I’ve followed Theresa’s blog for a long time. She sets up a gorgeous booth! 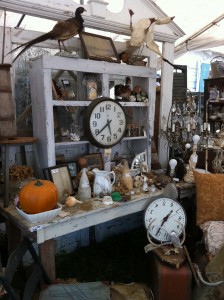 I have no idea how many miles we walked in those fields on Saturday, but we finally finished up around 3:30.  At this point we decided to just drive back home rather than getting a hotel that night. The traffic leaving Round Top was crazy. It was bumper-to-bumper on a little 2-lane highway for miles. Just as Ole Yeller’s (my truck) engine was getting a little too hot for our comfort, the traffic dissipated and we were on our way.  We finally got home around 12:20 Sunday morning.

It was an incredible trip squeezed into 3 days.  We could have easily spent a week if we wanted to really take everything in! We passed by the Red Barn Antique Show and other fields full of goodies because we just didn’t have time to see it all.  We definitely know how to plan for the next trip now.  Maybe next year! 🙂

1 thought on “Adventures in Round Top, Texas”