I finally received my UPS insurance claim check yesterday after four long months of uncertainty whether I would get it or not.

In early December, I listed a gorgeous milk glass Westmoreland punch bowl set with stand, ladle, and 12 cups on eBay after watching a couple sets sell for $250-$300. 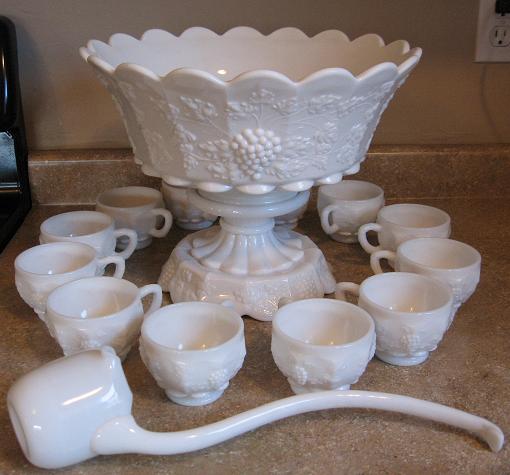 I originally bought the punch bowl set at an auction around 6 years ago with intentions of using it in my eventual wedding. Little did I know that I’d choose a venue 4 years later that would provide a punch bowl. I had never used it and wanted to cash in on the set’s popularity, so I listed it for .99 and let the bids fly. It only ended for $174, but that was more than I had paid for it, so I was satisfied.

I had planned on shipping the set using USPS Priority shipping, but I didn’t think to calculate in the bulk rate when I started the auction. Instead of losing $10 from the miscalculation of shipping cost, I started looking at other options. UPS could mail it for a much cheaper price, so I packed up the set and shipped it with adequate insurance from my local UPS Store.

Six days later I received a call from the winning bidder that the punch bowl was shattered. Immediately I Googled other people’s experiences with UPS insurance claims. My stomach sunk as forum after forum was filled with negative experiences where UPS had denied insurance claims. I have always had my insurance claims paid, so this was new to me! If you purchase insurance, it’s covered, right? Not always…

The first step of the claims process is the inspection of the box and contents.  I learned from my research to never let UPS take the box of broken items if there’s anything you think you can salvage. I mention this because they will take the box saying they’re taking it to an inspection center when they’re actually sending the box back to the shipper, leaving way for more breakage. Just request an on-site inspection and the UPS driver will inspect the box and its contents. I’m so glad I did my research and asked for an on-site inspection!

I asked the winning bidder to add newspaper where the punch bowl collapsed and ship it back to me. I refunded all his money plus the amount to ship the box back. It was an extra expense, but now I have the insurance claim check and the good pieces to the punch bowl set. Otherwise UPS could have lost the package in shipment and would have definitely trashed the package once I got the claim check.

Another thing to be wary of is shipping through UPS Stores. When you ship from a UPS Store, UPS considers them the owner of the package, not you. So if there’s a claim, the UPS claims dept will not tell you anything if you call them. Trust me, I tried, but every time they’d tell me I was not the shipper of the package so they couldn’t tell me anything. UPS even writes the claim checks out to the UPS Store! I was very blessed because Gina at the UPS Store (Now in North Little Rock) is super helpful and patient with my multiple calls. You can probably imagine how this could have went if the owner of the UPS Store didn’t care!

With over $200 at stake, I was calling the UPS store weekly about the claim. During the months of waiting, I started looking for another punch bowl so I could have a complete set again. On a whim, I Googled “Westmoreland punch bowl” and found a lady in Pennsylvania selling her punch bowl, 9 cups, and 12 hooks on Craigslist at a great price. I emailed her and we worked out the details of how we could do the transaction where it would be safe for both parties. Since she didn’t have shipping materials, I actually shipped her empty boxes, packing materials, and step-by-step instructions to pack the pieces! Everything worked out great, so I have a complete set again.

Sometime in late February, the bad news finally came: My insurance claim was denied due to “improper packing”. I learned that for insurance claims over $100, UPS uses Crawford Insurance, who, according to a lot of the forums I read, pretty much always denies the claim the first time through. I also learned that UPS has specific requirements of how they want things packed, which was news to me. Gina told me she had appealed the first denial and tried again with no luck. By this point I had already accepted that this was probably how it would be and knew from research that UPS is pretty sly when it comes to taking them to court, so I just considered that a bad day and carried on.

Around spring break in March, Gina called me out of the blue and said she had appealed the denial one last time and actually got the denial reversed!! I was completely surprised because I thought the process was over as of the last phone call. During that call I mentioned that the box was crushed on one end and there was even a hole punched in the box from rough handling. Gina used these facts to prove it was indeed UPS’s fault for the punch bowl being crushed. So now, due to Gina’s hard work, I have a $200 check and can sell the punch bowl set for a reasonable price at Jenifer’s once I figure out a safe and secure way to display it.

If you’re in the North Little Rock area and need to ship via UPS, Gina’s UPS Store is the place to use because she made it quite obvious she will fight for her customers!!

Sorry for this post being so long! I believe this information should help someone in the future, especially if they end up in my shoes Googling UPS insurance claims. If you find yourself in this situation and have questions, please email me, even if it’s to vent! ashley@ashleysfinds.com