Do you call it addiction when you wake up at 5:30AM on auction day wide awake when on most work-days 7:00AM is killer? I woke up still doubting whether I should make the 2 hour drive to Camden for a gamble, but I was in the mood for an adventure! So I loaded up three 18-gallon storage containers, a huge trash bag full of bubble wrap, a dolly, and a “granny cart” just in case I needed them.  I even brought a thermos of water and packed a mini-cooler with sodas and snacks. I was prepared for an all-day event!  I cranked up KLove on my radio and pulled out of my driveway at 6:45AM.

Both Mapquest and my GPS told me it would take 2 hours and 20 minutes to get to Camden from Maumelle, so I was pleasantly surprised when I arrived at the auction after only two hours.  This gave me plenty of time to check out the condition of the Camark pieces before the auction began. I was thrilled to notice the auction included the climbing cat that I’ve been wanting to add to my collection! I was also excited to notice less than 40 people had shown up, so I figured my chances of getting great deals was really good!

The sale began outside and didn’t include anything that was much of interest to me. I did win this neat large piggy bank: 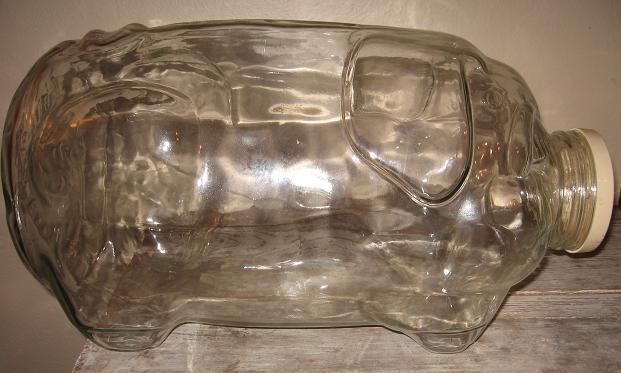 Next, the contents of the garage were auctioned off. I learned during this time that the rules of this auction were a little different than what I’m used to. For one, I guess due to inflation, the auctioneer would not accept starting bids less than $3.  No one would bid on a nice old glass oval platter, so I bid $2.  The auctioneer looked at me and said, “$3?”. So I went with it and got the platter for $3. I probably drove that auctioneer crazy with $3 bids, but like I told him, I was there for a good deal!  One time when I started a bid at $3 for a neat old metal advertisement sign, he looked at me and said “That’s worth WAY more than that!” and I replied, “No one else is bidding…we, the bidders, determine it’s value!”

I also learned that if the auctioneer didn’t like the price something was going for, he used his own bidder number to win the item.. that’s a first for me! I already had my go-off speech ready for if he did that with the Camark pieces. It would have started with something like, “I just traveled 2 HOURS for this auction to get some good deals! This ain’t fair!”, but luckily for him, absentee bidders took care of that. Some people from out of state (New Jersey, etc) sent in absentee bids for the Grapette and Camark stuff. I was blown away when I started a bid on a tiny Grapette framed advertisement for $3 only to have the auctioneer go, “$5, $10, $15, $20, $25, $30 – $35?”. Apparently the absentee bid was for $30 for the tiny thing, so I was quickly out of the bidding. With some of the Camark stuff, someone bid to infinity so they could win regardless of what we bid on the pieces.

I had another first at this auction too. One guy would bid on a group of items for choice of one item and then take the rest of the items in the lot for the same individual price. For example, on a group of Star of David pressed glass, he bid up to $15 for the first piece and then took the 13 other individual pieces for $15 each. On the Department 56 houses, for one lot he bid $9 for choice and then took every piece in the 13-house lot for $9 each and did the same with the second lot of houses at a bid of $12 each. Basically no one had a chance to win these pieces once the guy won the first item. This was good for me because I didn’t need the temptation to buy the houses and it saved us lots of time since we didn’t have to auction each individual piece!

So you can see I started off with a few obstacles in my way to getting some good deals. I still pulled it off though, starting with these gorgeous Lenox, Fenton, and Lefton butterflies: 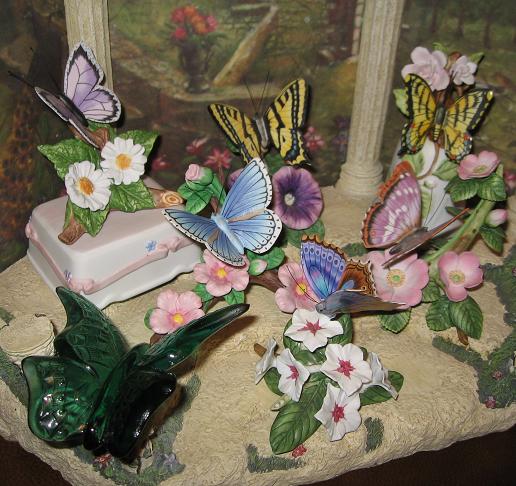 The Lenox butterflies appear to do well on eBay, so I’ll probably be listing them next week to see how they do. The other pieces will go to my booth at Jenifer’s Antiques in Conway. I found the neat Fontanini backdrop at the Salvation Army a couple days ago. It looks great with these butterflies!

Along with the above lot, I got these nice bells: 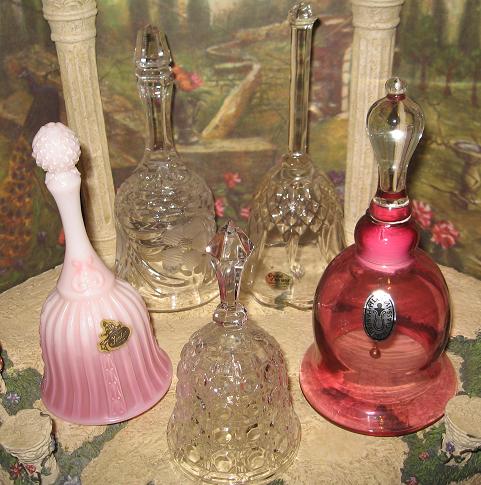 One of them is Fenton, but I’m not sure what the makers are for the others. I’ll have to do some research. At least one of them is hand-blown!

I got this awesome coffee grinder: 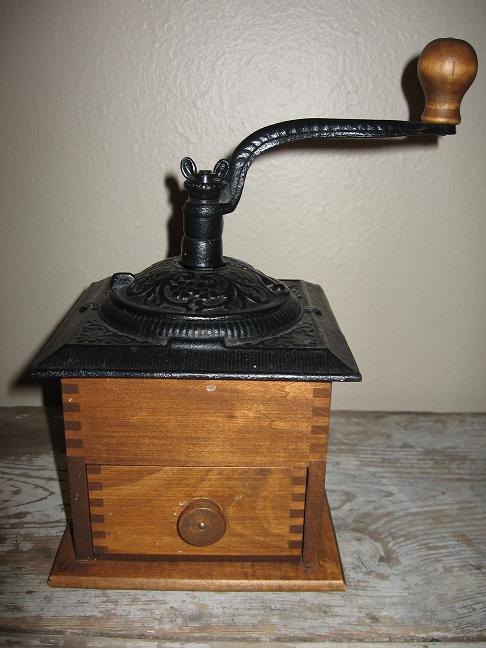 I did get my hands on some Grapette stuff. I learned that Grapette was produced in Camden, Arkansas, beginning in 1939. No wonder Camden’s motto is “Where History Lives”; It originally housed the Camark and Grapette companies, so the estate sales and antique shops are the places to be to find this stuff.  I won this awesome framed advertisement: 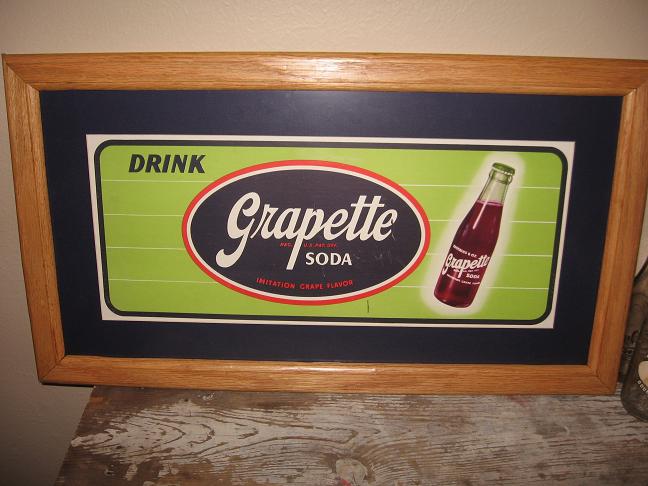 And then some super cool bottles. Some Lemonette, Orangette, Dr. Pepper, and other bottles were mixed in too: 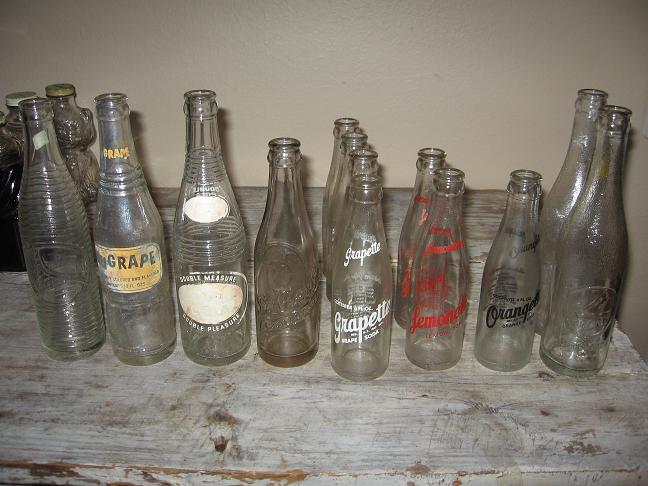 I got these great banks too. One of them is actually filled with Grapette soda! The one on the far left is a cat and the two on the right are clowns. 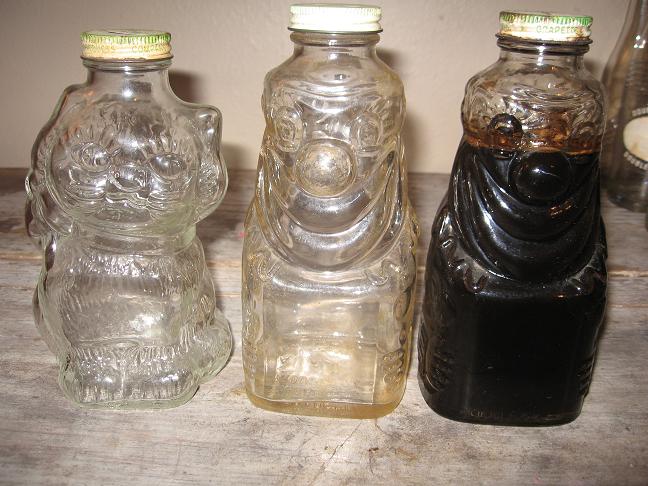 Next I got an awesome enamel-top table with 2 leaves for a great price. The next photo is the auctioneer’s photo of the table. The legs were pretty rusted, but the enamel top is in excellent condition. I have a trick to get rid of rust on chrome which I’ll post about in a later post. 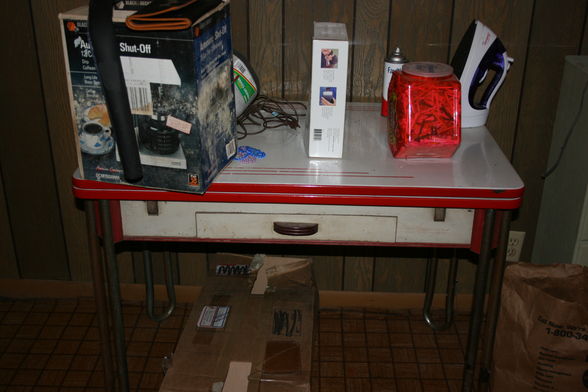 I also got these super cute donkey planters. I think they’re made by Pfaltzgraff: 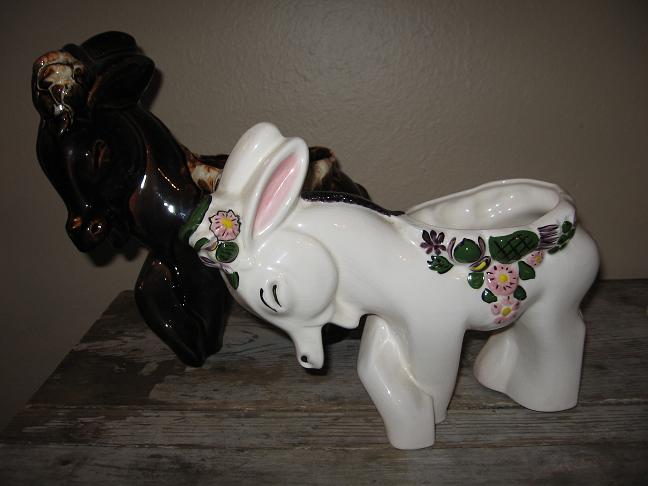 And now for the good stuff: Camark! I got some great pieces. I love the colors of this group: 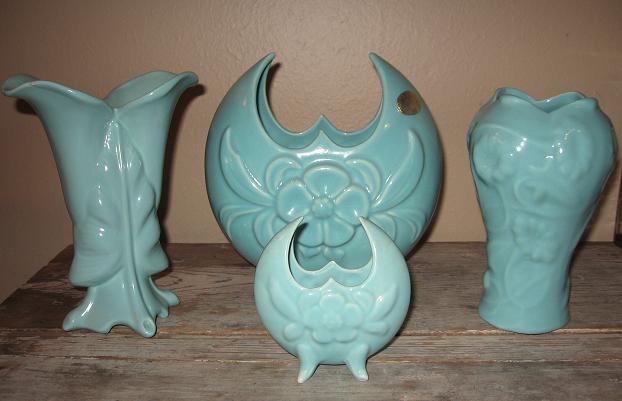 Next I got these small pieces. I got the black pitcher for $1 because the handle was repaired. It had a nice repair job so I was happy to get it. The bunny is sooo neat because it’s a cotton-ball dispenser! How cute is that?! The cotton balls look like his tail.  The little blue thing is actually supposed to be a stove-shaped ashtray. When a cigarrette is placed inside, smoke comes out of stove’s “pipe”! So neat! 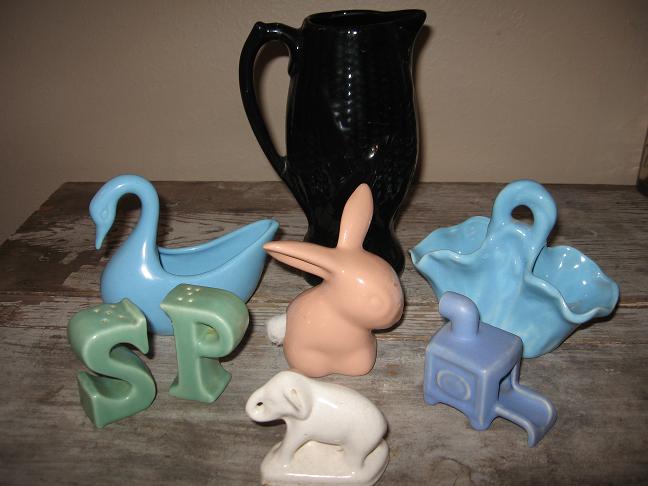 I think these ashtrays could be a great find. One is for Arkansas and the other is for “Big Texas”: 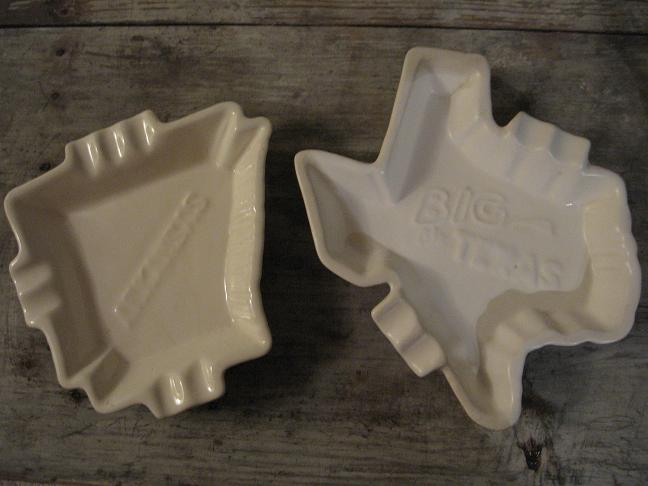 I forgot to take a photo of the neat green vase, so I added in the yellow Haegar planter with it. You know the planter will have to go in my kitchen with the rest of my yellow pottery!

I also got the unique pieces below. I’m not sure what the makers are, but I’m hoping to do some research to figure that out. 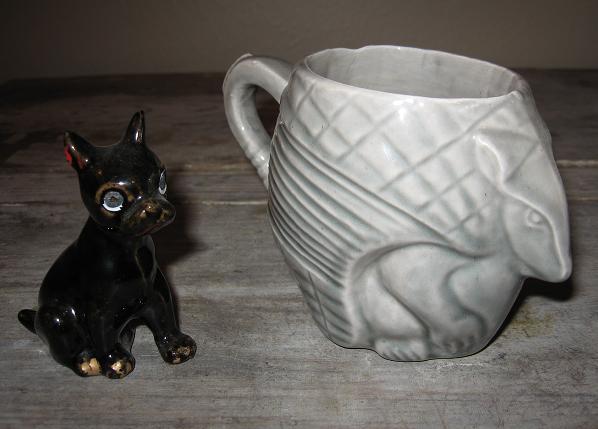 One of the questions I posed in my email newsletter and in a blog post last week was: How do the Camden locals value Camark pottery? What I learned is that the locals know their stuff and are willing to pay for the rarer pieces. I was bidding against antique dealers who would pay eBay prices and above for some of the pieces. Then, as I mentioned earlier, the absentee bidders would take the bids even higher.  On the other hand, for some pieces, the auctioneer would make comments like, “I’ve probably had a hundred pieces like this piece”, which would devalue them and help me get a good deal. I really think the “Big Texas” ashtray may be a sleeper — I’ll let you know what I find out! I may just have to stick it on eBay and see what happens. 🙂

This concludes how my Camark collecting in Camden, Arkansas went last Saturday. I had a blast and I’m really glad I went!