I promise I have an excuse for not posting lately. For the past couple of weeks work has worn me out with long hours. Then on Monday I made the mistake of weedeating a patch of grass full of poison ivy. You can probably guess the rest. I’ve never had an allergic reaction before, so I didn’t take the proper precautions. Now my face, neck, arms, and legs are covered with the most torture-filled rash ever created. The past few nights I’ve actually gone to bed early (*gasp*) because I’m guessing allergic reactions just exhaust a person. I’ve had to force myself to list some of the items I bought at the Marty’s Gift Shop liquidation on ebay this week. After two days of scratching, I finally broke down and bought some anti-itch cream at Wal-Mart. I was almost tortured enough to buy the $35 stuff, but my tightwadedness won over and I bought the ~$4 stuff called Ivarest. It is amazing and stops my itching for hours!

But of course through all of this, even though I didn’t have time to write a blog post, I had time to dream up my next adventure: Get a new antique booth! Lately, with all the junkin’ I’ve been doing, I’ve accumulated a lot of stuff and have decided I should expand. I’ve never had much success from expanding at the same antique mall (I believe you can crowd the market if you have too much of the same stuff at one place), so I’ve been asking around where people are having success in these tough economic times.

I spoke with an antique dealer on Thursday that was strolling through Jenifer’s Antiques and she told me that she has a booth at Crystal Hill Antique Mall and that it’s doing well.  That is so rare to hear these days that I had to go check the place out. I got off work earlyon Friday so I used my free time to see what the lady was so excited about.

As soon as I walked in the door to the antique mall, I felt at home. Gorgeous, well-displayed antiques were at every corner! I recognized a lot of the dealers that were working their booths because those are the same people I stand in line with waiting for estate sales to begin 30+ minutes before time to open. Others I have seen at auctions from time to time.  I talked to one man that I didn’t recognize and he told me he used to go to Thacker auctions in Judsonia. Gary Thacker would (he may still do it) go up North and buy out antique shops and bring the stuff back and have auctions every other Thursday night. Back when I was in college and lived in Searcy I rarely missed an auction. Sometimes I’d have to bring my homework with me and bid and do my homework at the same time!  The man told me that the antique mall is the best place to have a booth in Arkansas in his opinion. He also bragged of how the mall has cook outs and activities for its dealers.  I’ve never heard of that being done! It’s brilliant because networking is the way to get ahead in just about any business.

As I browsed around, I found one large 10×19 booth available for rent. I really had in mind getting something small that I could easily pack full, but after all the feedback I got from other dealers, I decided I probably should take it. I talked to the people managing the place and they were super nice and super-excited about antique dealing like me. They had even visited this website! I told them I would think about it and get back with them today about whether I want the big booth or to wait for a small booth.

After much thought, I decided to go off the deep end and take the large booth. My reasons why:

1. It could take months before another booth comes open. I waited 6 months for a booth at Jenifer’s Antiques.. and a year for a booth at the Junction in Conway. Really, the only scary thing about a big booth is the big booth rent…and the fact that I’ll have to work twice as hard to pack it out quickly since time is money. I’ve got the stuff to pack it out, but it will totally deplete my reserves.. which means more shopping in my future! 😀

2. I can use the “bad” months to become established. The next 6 months are typically the slowest of the year. School starting, property taxes, and the holidays seem to do a number on potential buyers. This also ties in with point #1. I got to thinking about it and most of the time I have started booths during the “bad” months because that’s when booths come open.

2 Responses to “A New Adventure!”

Sign up for the Ashley's Finds weekly newsletter announcing estate sales and auctions in the central Arkansas area! 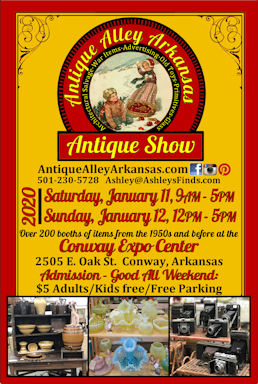