Instead of going out junking on Saturday, I decided to work on my antique booth at Jenifer’s Antiques in Conway. I’ve wanted to get the monster of a shelf (~5′ x 8′) that I bought at the Just T’s-N liquidation into my booth since I bought it 2 weeks ago, so I grabbed my hubby and we made it happen.

Part of my booth has been stagnant for a while, so I decided the shelf would be perfect there. An old lawyer’s bookcase has occupied the stagnant space (as in nothing has really sold from this section) since I opened my booth at Jenifer’s, so it was time for a change. I got the old lawyer’s bookcase off of eBay. It’s kinda hodge-podge, but it gets the job done as a old rustic shelf. It is now back-to-back with the new addition, so I still get to use it to display items.

The big black shelf was a pain to get inside the shop.  After sliding it in the door, we had to clear out enough room to lay it on its back and then stand it up. I think we had around 5 inches to spare from the ceiling. I decided to wait a while about pricing it because I want to enjoy all of its shelving!!

I ran out of time to do fun displays in the shelves, so hopefully I’ll get to that this week. I picked up a box of Currier & Ives dishes during a lunchtime junking session last week, so I’ll clean them up and maybe do a blue-and-white display. I plan to add a rope light to create plenty of light on the items for sale. 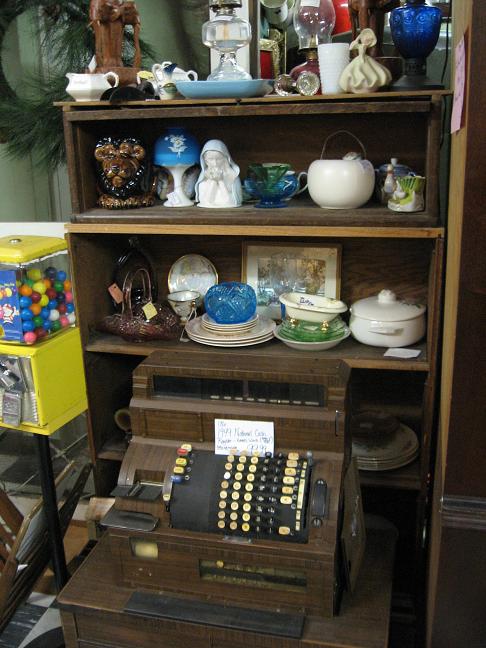 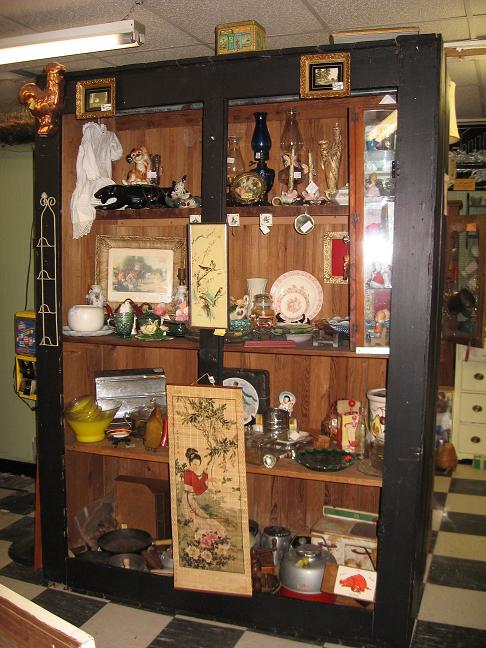